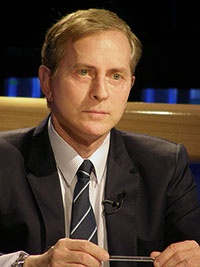 Clinical Professor in Maxillo-Facial Surgery, specialist in Maxillo-Facial Surgery and Odontostomatology. His expertise covers facial reconstructions, implantology, orthognathic surgery, traumatology, orbital surgery, oral surgery, treatment of temporomandibular joint dysfunctions, and aesthetic surgery. He is an expert in the treatment of congenital craniofacial malformations and in the multidisciplinary treatment of exophthalmos in Graves’ disease.Currently,he is a member of the Maxillo Facial Surgery Staff at the Istituto Stomatologico Italiano, Milano, Italy. Reconstruction of facial volumes by using Fat Grafting is also one of his main interests. In the 90’s Prof. Clauser was one of the last of Paul L. Tessier’s pupils in Paris. From 2006 to 2008, he held the position of President of the EACMFS. In 2008 he organized the 19 EACMFS Congress in Bologna, Italy. He is an advocate for promoting Maxillofacial Surgery in Eastern Europe and other continents with limited resources. Prof. Clauser has had the privilege of being an invited speaker at many congresses and scientific events worldwide. He has authored over 230 scientific publications, 9 chapters in books, and is a reviewer for many international scientific journals. In Europe he was among the first surgeons to introduce the use of PiezoSurgery in facial and craniofacial reconstructive surgery. In May 2012, Prof. Clauser was invited to deliver the prestigious Wilhelmsen Lecture on Craniofacial Sciences at John Hopkins University, Baltimore, USA, as a special recognition for his remarkable contribution to the craniofacial discipline. Prof. Clauser has organized more than 80 international events with renown guest speakers coming worldwide. In 2013 the Center of Cranio Maxillo Facial Surgery in Ferrara,headed by him ,has been included among the European Association for Cranio-Maxillo-Facial Surgery- International Teaching Centres Network.